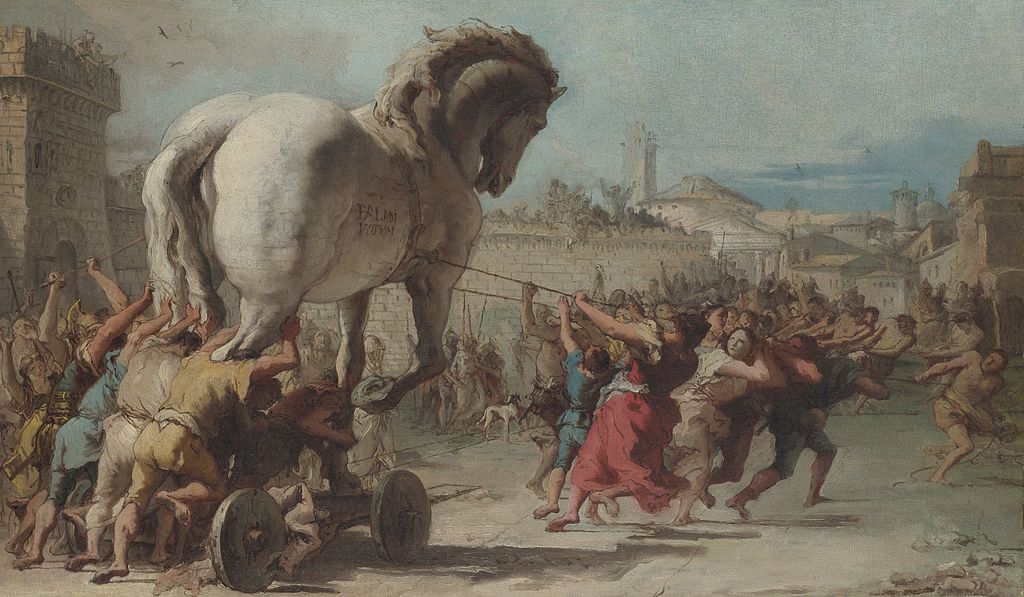 The Trojan Horse is a tale from the Trojan War, as told in Virgil‘s Latin epic poem The Aeneid, and also by Dionysius, Apollodorus and Quintus of Smyrna. The events in this story from the Bronze Age took place after Homer‘s Iliad, and before his Odyssey. It was the stratagem that allowed the Greeks finally to enter the city of Troy and end the conflict.

In one version, after a fruitless 10-year siege, the Greeks constructed a huge wooden horse, and hid a select force of 30 men inside. The Greeks pretended to sail away, and the Trojans pulled the horse into their city as a victory trophy. That night the Greek force crept out of the horse and opened the gates for the rest of the Greek army, which had sailed back under cover of night. The Greek army entered and destroyed the city of Troy, decisively ending the war.

In the Greek tradition, the horse is called Δούρειος Ἵππος, Doúreios Híppos, the “Wooden Horse”, in the Homeric Ionic dialect. Metaphorically a “Trojan Horse” has come to mean any trick or stratagem that causes a target to invite a foe into a securely protected bastion or space.

This story has always fascinated me through the years. It is amazing how the enemy can catch his foe off guard. We know that we must at all times be alert and on guard for anything that looks evil but what about something that looks so innocent? Paul said in, Eph. 6:11 “Put on the whole armour of God, that ye may be able to stand against the wiles of the devil.” Wiles mean trickery. This is what happened to the people of Troy. The Greeks tricked them.

There are so many things in the world that look harmless, as that horse looked harmless outside the gate of the city. As long as it was outside of the city it was harmless. It wasn’t until they brought it into the city that the damage was done. Things that are harmful to a child of God start off so small and insignificant, but they grow until they destroy us. We say, “Oh that won’t hurt me”. How many times have we been deceived with that thought? There is no telling how many things in our lives started out small but kept growing into defeat. Remember, it wasn’t until night fall and everyone was asleep that the soldiers came out of the horse and destroyed the city.

Ac 20:31 Therefore watch, and remember, that by the space of three years I ceased not to warn every one night and day with tears.

Col 4:2 “Continue in prayer, and watch in the same with thanksgiving;”

2Ti 4:5 “But watch thou in all things, endure afflictions, do the work of an evangelist, make full proof of thy ministry.”

Mt 26:41 “Watch and pray, that ye enter not into temptation: the spirit indeed is willing, but the flesh is weak.”

We have to continually be on guard and not let anything enter our heart that will cause us damage down the road. We can begin to harbor small, insignificant thoughts that will eventually grow into something that we can’t handle on our own.

Bro. Patton always said: You can’t stop a bird from flying over your head but you don’t have to let it build a nest in your hair. We need to continually guard our minds so that we don’t conceive a thought that will turn into an action of sin. James 1:14 – 15 “But every man is tempted, when he is drawn away of his own lust, and enticed.  Then when lust hath conceived, it bringeth forth sin: and sin, when it is finished, bringeth forth death.”

If we control our thoughts we can control what enters our heart.

The ministry, as the watchmen on the walls, is to cry out to the people and warn them about sin. Not just the obvious but the things that look so innocent. The ministry has a responsibility to protect the people of God.  Isa 62:6 “I have set watchmen upon thy walls, O Jerusalem, which shall never hold their peace day nor night: ye that make mention of the LORD, keep not silence.”

People feel that they can decide for themselves what is evil and what isn’t. I would agree with them if evil was that easily detected. However many times,  -just like the people of Troy –  evil isn’t detected until we have let it in and it is now destroying our city. Many times people feel that the ministry is too hard or too strict. Sin is so deceptive that men of God have to be diligent in preaching against anything that they feel will destroy the minds and hearts of the people of God. I can imagine how the people felt that day when they looked over the wall and saw this big horse outside the gate and no enemy in sight. They looked all around and didn’t see the enemy, just this big horse. They were so overjoyed that the enemy had gone that they let down their guard. The horse was left for a token and looked so innocent. Where were the wise men of the city? Where were the watchmen on the wall? It looks like the same thing that happened there was like what was described in Isaiah’s day.   Isa 56:10-11 “His watchmen are blind: they are all ignorant, they are all dumb dogs, they cannot bark; sleeping, lying down, and loving to slumber. Yea, they are greedy dogs which can never have enough, and they are shepherds that cannot understand: they all look to their own way, every one for his gain, from his quarter.”

We are blessed today to have watchmen on the walls that are not asleep, not looking to please themselves, but are full of wisdom. There is a ministry today that has the people of God in their heart and not looking for gain. Church, take courage in the fact that you have men of God today that will not let just anything inside the city, no matter how innocent it looks. Stand by the ministry, for they watch for your souls.  Heb. 13:17 “Obey them that have the rule over you, and submit yourselves: for they watch for your souls, as they that must give account, that they may do it with joy, and not with grief: for that is unprofitable for you.”

In the words of the Apostle Paul, Heb. 13:18 “Pray for us: for we trust we have a good conscience, in all things willing to live honestly.”  Don’t condemn or criticize the ministry but pray for them. There are many things outside the walls that are wanting in and the men of God need the strength and support of the saints to hold up a standard.  Isa 59:19 “So shall they fear the name of the LORD from the west, and his glory from the rising of the sun. When the enemy shall come in like a flood, the Spirit of the LORD shall lift up a standard against him.”

Thank God for the watchmen on the walls. Let’s keep the enemies devices outside the camp.

An Encounter with Destiny

Rightly Dividing The Word of Truth

The Touch of an Angel